Getting One’s “Fix” Through Netflix: Some Thoughts on Binge-Watching

Anyone who has a Netflix subscription, or anyone who simply has watched any of its growing number of original television series, knows that this streaming service is not like “traditional TV” in a number of ways. As Mareike Jenner states in her article “Is This TVIV? On Netflix, TVIII and Binge-Watching,” the online platform, “often hyped as a ‘new HBO’…actually offers a different kind of TV revolution than previously associated with the premium cable channel: Netflix is simply not TV” (2016, 261). Like HBO, which promoted itself as “not being [ordinary] TV” but rather a premium producer of quality programs, Netflix differentiates its original programming from network and cable channel offerings by giving “creative and budgetary freedom to television auteurs like Mitch Hurwitz and Jenji Kohan” (Ibid., 263), who are allowed “to develop riskier and more demanding shows” (Sim 2016, 188).

Moreover, from the audience’s point of view, the experience of watching a program on Netflix differs considerably from that associated with broadcast TV spectatorship, because it is not littered with linear television’s commercial interruptions and is not structured around week-long waiting periods for episodic and serial installments. It thus encourages a particular type of viewing — namely binge-watching — which both results from and produces a particularly devoted form of fandom.

For years, dating back to its debut in October of 2000 (when it aired on the now-dissolved WB), I have been a fan — and, yes, that word most definitely is a shortened form of “fanatic” — of creator Amy Sherman-Palladino’s Gilmore Girls. I’ll spare you the details of why it has remained in my “Top 10” list of favorite TV programs since that time – feel free to buy/read my edited volume Screwball Television: Critical Perspectives on Gilmore Girls (recently updated in a second-edition reprint) if you would like to learn more about its cultural significance, its worthiness as an entry into the medium’s canon of all-time greats.

So it was with great expectation, and some degree of trepidation, that I looked forward to Netflix’s release of a four-episode online miniseries entitled Gilmore Girls: A Year in the Life, which was made available for viewing beginning in the fall of 2016. November 25, to be exact, the fourth Thursday of that month — an appropriate date in terms of giving thanks for all that is good in the televisual universe. That was roughly nine years after the final episode of Gilmore Girls aired on the CW, and some fans — myself included — worried that time would not be kind to the titular mother-daughter duo, Lorelai and Rory.

Although the DVD-by-mail and video-on-demand (VOD) giant, which currently has approximately 120 million worldwide subscribers, had already resuscitated several cancelled network and cable shows, including Arrested Development (Fox, 2003-2006), The Killing (AMC, 2011-2013), and Longmire (A&E, 2012-2014), its relaunch of Gilmore Girls was a media event of a different sort. Netflix’s release was particularly well-timed, as it had started streaming all seven seasons of Gilmore Girls in October 2014, rekindling the show’s cult fandom and recruiting a new legion of viewers who had missed the series during its original broadcast.

This is something that I and my coauthor Hye Seung Chung discuss in our chapter “Post-Network Television and Netlfix’s Gilmore Girls: A Year in the Life,” which was included as a Coda at the end of Screwball Television’s recent reprint. In particular, we looked at a number of fan tweets in reaction to Netflix’s September 11, 2014 announcement of the entire show’s streaming release (which debuted the following month). One fan tweeted, “Gilmore Girls on @Netflix??? Time to start using those vacation and personal/sick days! #gilmoregirls.” Another’s tweet read, “Oh man, Netflix is going to have the entire run of Gilmore Girls? This isn’t going to be good for my productivity. Or my hygiene. Or my life.” Yet another fan tweeted, “I’m just preparing myself to fail out of college in October due to the fact that Netflix is getting Gilmore Girls. My life is made.” Another Twitter user expressed a similar sentiment, stating, “i mean i might as well just quit my job now bc come oct 1 i won’t want to do anything except watch gilmore girls on @netflix.” Likewise another Tweeter, who wrote, “Gilmore Girls is coming to Netflix. Please don’t speak to me after October 1st, I’m v busy (indefinitely)” (NOTE: Kristin Harris compiled a list of “the best Twitter reactions to Gilmore Girls coming to Netflix” at BuzzFeed, which can be found here)

These short bursts of fannish discourse attest to the cult show’s compatibility with the binge-watching mode, which Netflix’s business model has helped to normalize. Defined as a sustained engagement with a televisual text over several episodes viewed one-after-the-other (back-to-back), binge-watching has been likened to a form of spectatorial “addiction” that, if one is to take the above tweets seriously (and thus think of Netflix as a way to get one’s “netfix”), apparently comes at the expense of professional productivity and one’s social life.

By releasing every episode of a given TV series simultaneously, the online streaming service is upending decades of received wisdom about the consumption patterns of audiences, who would otherwise be forced to endure a wait time of one week between episodes. But in adopting this new distribution model, Netflix is also fundamentally altering viewer-text relations, providing greater opportunities for story immersion while also presenting audiences with physical and psychological demands that might have lasting — perhaps deleterious — effects for years to come.

Last week, I asked my students to post blogs about the binge-watching phenomenon, and what they thought about being made to watch a half-dozen episodes of House of Cards — Netflix’s first self-commissioned original content series — over a relatively short span of time. I wanted to see how the experience of watching back-to-back-to-back episodes of that multi-chaptered political thriller might have impacted their relationship to the characters, their understanding of the narrative, and their ability to grasp the series’ underlying themes.

I also asked them to read two chapters from the book The Netflix Effect: Casey McCormick’s “‘Forward is the Battle Cry’:  Binge-Viewing Netflix’s House of Cards” and Zachary Snider’s “The Cognitive Psychological Effects of Binge-Watching.” Of these two, McCormick’s essay is the most interesting, as the author explores how House of Cards manages to foreground the spectator’s own televisual cravings or obsessions through the theme of addiction. McCormick also makes the case that there are several spectatorial “surrogates” in the first and second seasons of that program (characters such as Doug Stamper, Frank Underwood’s White House Chief of Staff, who can be seen at an AA meeting in one episode). Although Snider, in his chapter, argues that binge-watching, in much the same manner that social networking applications are known to cause feelings of “loneliness, depression, and anxiety,” can be an isolating experience leading to “social and familial ostracization,” I tend to think of the experience in more positive terms, ultimately siding with McCormick’s belief that binge-watching is actually (perhaps counterintuitively) a productive mode of viewing. 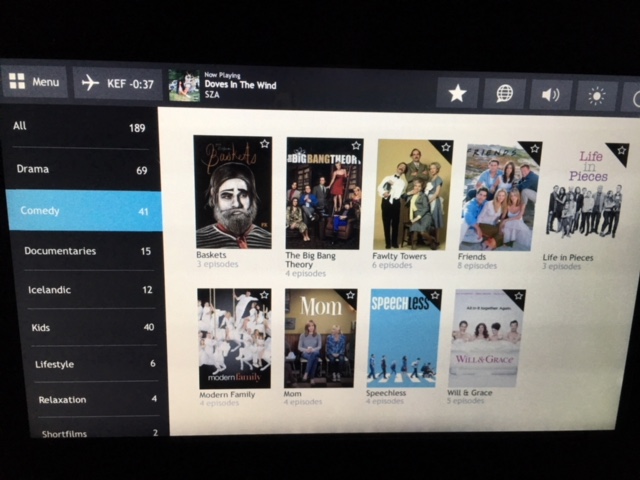 Coincidentally, as I was formulating ideas for this blog on a long flight from Denver, Colorado to Reykjavik, Iceland, I was seated between two fellow passengers who were each binge-watching the first season of the critically lauded Hulu series The Handmaid’s Tale (all ten episodes of which were just a screen tap away, available for viewing on their seat-back monitors). Although the cross-Atlantic flight was not long enough for them to squeeze in every episode, they did manage to watch the first five, never once falling asleep, and taking momentary breaks only for refreshments delivered to them by friendly flight attendants. In fact, the woman to my left, in the aisle seat, was glued in place for the duration of those five episodes, making my need to take a bathroom break all the more awkward (as I did not want to interrupt her viewing). By the end of the flight, this binge-watcher was blurry eyed and physically fatigued (she hadn’t slept at all during that night), but she also seemed to be spellbound and even revitalized by what she had just seen. When I asked her if she was planning to watch the remaining five episodes of Season One, she responded enthusiastically, if somewhat begrudgingly, “Now that I’ve watched the first half, I kind of HAVE to.”

Oh, by the way, I ultimately ended up spreading the four simultanesouly released episodes — roughly six hours — of Gilmore Girls: A Year in the Life over four consecutive evenings beginning on Thursday, November 25, 2016; a relatively luxurious way to savor the return of Lorelai and Rory compared to other fans’ rush to see everything at once. Not exactly binge-watching, to be sure. But not really a “normal” way to consume TV either. Something in-between, and therefore something very “Netflix.”

View all posts by sdiffrie

One thought on “Getting One’s “Fix” Through Netflix: Some Thoughts on Binge-Watching”