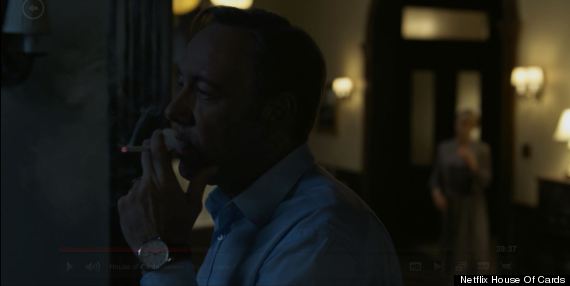 Binge Watching and the Consequences

House of Cards has never been something on my “to-watch” list, I knew it was about politics and there was an intense web of lies and sub-plots that it seemed too difficult to watch. It didn’t seem like a show I could watch to wind down. So when assigned this show, I was hesitant on whether I would like it and if I could make it through six episodes easily. To my surprise I found it extremely entertaining to watch, I got the six episodes assigned watched in one whole afternoon. Something that I noticed about the characters right away was that there wasn’t a single likable person. They all had something about their personality that was vile, and a lot of them were the addictions that Casey McCormack mentions the surrogate characters tend to have. However, even though these characters were so awful, I still found myself sympathizing with them such as when Peter was offered a razor by Frank, or when Frank flops during the CNN debate with Marty.

McCormack discusses that House of Cards was designed to be viewed as a binge watching show and themes, motifs, and characters are designed to reflect the binge viewer and keep them engaged. Going back to the surrogate characters, McCormack says, “[They] serve as a kind of instruction manual on how to be a good binge-viewer. As new surrogates are introduced and then killed off, we come to see their failures as warnings, or at least as gestures to the viewer’s experience. So while Netflix wants the audience to be binging the show, they warn that if you take addictions to extremes such as in House of Cards there can be negative consequences.

Addiction with the surrogate characters is heavily integrated into the show. Because each surrogate character has an addiction, it is therefore representing the viewer who could have the potentiality of treating binge-watching as an addiction. As mentioned before, the addicts are in place to show the viewer what it is like to be a good and bad behaviors. If you succumb to bad behaviors such as Peter with his alcoholism and drug use, you will be punished. If you use your addictions in reasonable purposes, then you will be rewarded such as Frank with his addictions to nicotine as well as power.

Something else I noticed in my viewing experience of House of Cards was the motif that was also mentioned by McCormack and that was the repeated scenes of Claire and Frank Underwood sitting by the window, smoking a cigarette. Because it happened repeatedly, I noted that this motif had to be important, perhaps trying to convey the end of the day or as a way of releasing the stress from their non-stop jobs. McCormack agrees and in a more fluid way states, “this scene implicates Frank and Claire in a grueling process analogous to binging and acts as a call for psychological (and physical) preparation. The scene also reveals one of their addictions—nicotine—  which will become an ongoing motif throughout the series” (106). This was one of the most enjoyable themes that I noticed because it showed a certain intimacy of the characters that were masked when they are put in the public sphere.

Instead of each episode of House of Cards being called “episodes” they are called “chapters” instead. This is because the show wants to associate itself with the term “quality TV” because chapters are associated with books. This makes the show seem like it is a piece of literature rather than just a TV show. McCormack also references the fact that it remains continuous throughout the seasons, indicating to the viewer that this is a continuous plot and doesn’t leave as much of a gap.

Personally I do agree with McCormack’s claim of binge watching, “is a productive, often deliberate, and potentially transformative mode of viewing” because of how efficient it can be. Instead of watching a show for weeks at a time on a TV network, you can experience a whole world in a short amount of time. I look at this on the terms of efficiency because you are able to experience so many more worlds and plots than you would otherwise. While I do note the danger of information overload, I think that it is human nature to want to absorb as much as we can, and binge watching is a great way to view “quality TV” at a faster rate. You also experience the characters feelings in a real sense of time such as with House of Cards where if you binged watched when it was first released, it follows a similar flow of time. While watching the show, I did feel the exhaustion that is a prominent theme. Every time a character slumped into their seat or were awake at ridiculous hours of the night, I also felt that tiredness.

I do understand where Zachary Snider’s opinions come into play as well. He claims that binge-watching does more harm than good and rather than just absorbing information, binging causes loneliness and depression amongst viewers, and I did relate to that as well because I felt anxiety and loneliness while watching only six episodes because I watched them by myself and I was engulfed in the political world of intense stakes that I felt I was part of myself. However, I stand my McCormack’s point more strongly because of the immersion that we as viewers feel is more productive in the long run because we are able to go through more content more quickly, and through different shows we develop empathy with people in certain situations we might not have in the past. Instead of isolating us from the world, binge watching also has the power to have us understand the world and people around us better. Using my own experience as an example, I was alone while watching House of Cards and whenever Frank started talking to me directly, there was some intimacy, and he also demonstrated the corrupt and manipulative side of politics that I was not as aware of until now. His demonstrations of his real thinking being towards me shows how natural politics can lie and be hidden from the public, and at the same time, I felt like I was in on Frank’s plots because of his undivided attention towards me.

View all posts by abaunoch