“Priming” the Audience, “Profiling” the Customer: The Algorithmic Cultures of Amazon and Netflix

In my Evaluating Contemporary Television class, I recently asked my students to think about Netflix’s use of predictive algorithms and other audience measurement techniques to control consumers’ behaviors while promising greater personalization of online experiences. Like Amazon and other web-based “content providers,” Netflix has relied upon data-mining systems to claim knowledge about the tastes, preferences, and identities of its subscribers.

Prior to the post-network era, television audiences were “measured” (in terms of their viewing tendencies, demographics, etc.) in a variety of ways, initially through a system devised by A.C. Nielsen and subsequently developed by the Nielsen Media Research group. Through Nielsen ratings, the industry was able to gather information about viewing patterns by way of audience surveys and, later, set meters which could be connected to TVs in randomly selected homes. Doing so allowed the networks and/or sponsors to set advertising rates and programming schedules and to determine the actual content of the shows. However, as Sarah Arnold points out in her chapter “Netflix and the Myth of Choice/Participation/Autonomy,” traditional audience measurement techniques neglected to account for the specificities of viewers’ behaviors (e.g., “the pleasures, motivations, and meanings” that Nielsen families might glean from the TV-viewing experience).

Because my students were asked to read Arnold’s chapter, I asked them how the hidden “datafication” of Netflix’s viewers differs from those earlier methods. I wanted to see if they believed that, by taking actions on behalf of the user, Netflix’s algorithmic predictions reduce human agency in any way. Here are some of their responses:

Logan T.: “Netflix’s algorithm has reduced human agency. The algorithm has, in a sense, given the viewer a small portion of what they can discover from browsing and pushes them in a direction more limited or censored, in a way.”

Alison B.: “Every single move you make is being watched and is being used to affect your experience, and that does not sound like free agency to me.”

Olivia J.: “Arnold argues that as individuality and personalization goes up, agency goes down. This is due to Netflix seeing subscribers as sets of data and not as people who are capable of action and speaking in a way which others can hear or understand. In this case, the user is forced to take on the identity Netflix crafted for it through data, rather than their real identity. However, I would argue against this. In my mind, Netflix is a service through which I can enjoy media and learn more from that media. I do not believe Netflix is impeding on my agency as a human at all, if anything, the access to vast amounts of media content through Netflix increases my agency. Just because Netflix absorbs my information to give recommendations to me does not mean, in my opinion, it is somehow stripping away my personality and governs my behavior and thoughts.”

Sarah K.: “As we’ve moved through the early part of the 21st century, our society has become addicted to instant gratification, which Netflix has tapped into.  I would posit that in order for Americans to live fulfilled lives and stay productive we are soon approaching a point where we will have to choose between the instant gratification of thought-free choices, like Netflix, and the removal of those temptations.”

Another reading concerning algorithmic culture is Neta Alexander’s “Catered to Your Future Self: Netflix’s ‘Predictive Personalization’ and the Mathematization of Taste” (which, like Arnold’s, is a chapter in The Netflix Effect). In this essay, Alexander considers the negative consequences of customers staying in their “comfort zones,” where only “the same formulistic products” manage to penetrate each person’s “filter bubble.” Despite the fact that Netflix provides customers with a vast array of choices, the “endlessness” of those choices is illusory; for, in fact, niche products and cinematic/televisual curiosities only rarely land into the website’s digitized stream.

On a related note, I asked my students how they felt about companies using their purchasing history and/or viewing habits to gain a better understanding of their “profile” (rather than their “personhood”). Here is how a few of them weighed in on that question:

Alison B.: “I personally find the idea of companies watching my purchases to get my ‘profile’ to be quite disturbing and not at all accurate. Most of the time when I purchase something, it doesn’t reflect the whole me, or what I like at all. Sometimes I purchase or watch things for other people or for classes and that can affect what my profile looks like based off of those things.”

Olivia J.: “I am for the most part fine with companies using my purchasing history and viewing habits to gain a better understanding of my ‘profile’. I find it a little odd whenever I search for a product online and find ads in the margins of future websites that I visit, but it does not bother me to the extent that I will change my media use habits. The same can be said for Netflix. I will not change how I use Netflix, what I watch, or how I search because that same information goes into my ‘profile’.”

Lesley M.: “I like that companies attempt to cater to my ‘profile’ and if I don’t like what they are suggesting, I am still able to access something else. Having a catered experience based on my profile actually enhances my online experiences, and I don’t think that is a bad thing.”

As for my own personal feelings on this matter, I remain somewhat ambivalent. Truth be told, I frequently look at Amazon’s personalized “recommendations,” and sometimes shake my head in disbelief at how frighteningly accurate the algorithms of that corporate-cultural behemoth are in pinpointing my tastes and predilections. Currently, these half-dozen items (three Blu-ray collector’s editions and three graphic novels/comic books) sit atop the list of things that Amazon believes that I should buy: 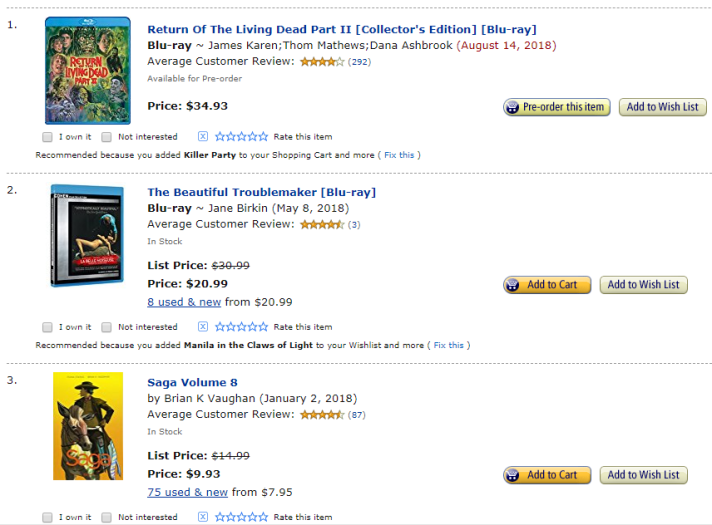 Yes, these six items do reflect some of my viewing/reading predilections, but they were all put on that list because of other (similar) items that I had “wish-listed” or added to my cart, making the algorithmic logic of the website fairly transparent, or easy to decipher.

More importantly, I would like to believe that these things do not give a complete picture of who I am as a fully rounded human being. Horror (especially of the campy and gory variety) has certainly been on my mind lately (hence Return of the Living Dead part II), as has the collaborative work of Marlene Dietrich and Josef von Sternberg (which makes the Criterion box-set a natural fit with my self-proclaimed identity as fan of the classical Hollywood studio system). But I also love silent slapstick, Peruvian pipe music, prison literature, contemporary Romanian cinema, histories of soccer clubs, the films of Yasujiro Ozu, the adolescent novels of Rebecca Stead, and so much more. Those and other omnivorous interests are not reflected in Amazon’s recommendations, which hold up a mirror that is accurate in its specificity, yes, but distorting in its incompleteness.

View all posts by sdiffrie