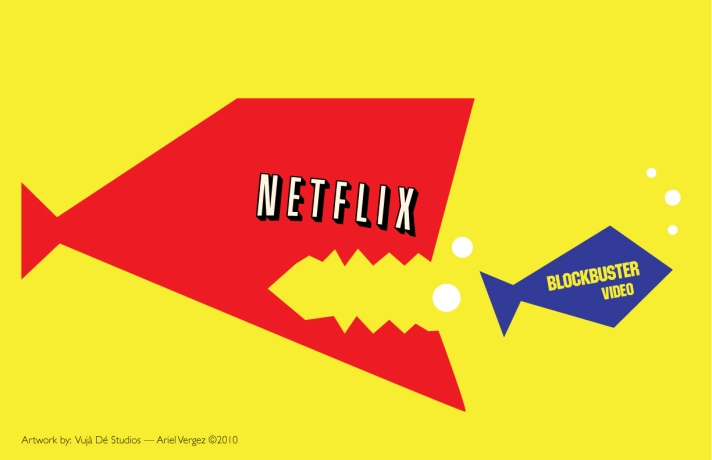 Netflix is in fierce competition with other media companies to gain as many subscribers as they can, worldwide. Early in its time, Netflix was a small online movie rental service. The accessibility that it provided was unheard of in its time. You could simply go online and just order a DVD directly to your house, without ever having to leave, something Blockbuster had not yet thought of.

With the expansion of the internet, Netflix has seemed to thrive while Blockbuster seemed to fail early on. Netflix was the first major media company to rely solely on the use of internet access while in regard to its customers. Blockbuster was a company that was in a way land locked with only allowing access to its catalog by going directly in-store. This was holding blockbuster back from gaining younger consumers as people were adjusting with the expansion of the internet. It seemed as Netflix understood what was needed for the future since Blockbuster was going to become a thing of the past, this is something that Netflix just knew was inevitable. While Netflix was trying to find other ways to help them succeed and keep their business running, Blockbuster was going through hard times as a company. There were internal conflicts between their CEO and one of their big-time investors. With these conflicts being so distracting, Netflix knew that Blockbuster would not be able to compete. Blockbuster made a strong attempt at trying to balance the online consumers and attract more customers through their idea of “Blockbuster Online.” The amount of money they were putting into this new Blockbuster Online was an amount that they could just not simply sustain. Netflix knew that they needed to withstand their debts long enough so that they could beat Blockbuster and take over the online movie streaming game.

As time went on, Blockbuster eventually went out of business. Causing Netflix to create a monopoly in the in the streaming game. As they are transitioning with the advancement of technology and the growth of the economy, they are now making Netflix “Originals,” which is causing more growth in subscribers, bringing them over 100 million subscribers. Some of Netflix’s competitors nowadays are other streaming platforms like Hulu, Amazon Video-Prime, and also HBO. It has gained some advantages over its competitors in ways that no one else has yet also seemed to be gained. These advantages that they have gained are the ease of access that it has provided to its subscribers, in a world that is constantly advancing, consumers are looking for anything that will provide them for what they are looking for in the least number of steps. Also, Netflix has made it available to take it on the go, by being able to download an app just straight onto your phone. That ease of technology is something that everyone is looking for, I think that says a lot about the climate we are in as a society. We look to do things in least number of steps, anyway to get through something the easiest.

Another place we can see an expansion of streaming becoming a major player in its respective market, is streaming music. This is another aspect where we see that consumers enjoy something that they can access with ease. Netflix has become a top player in the media game and I can only see them getting bigger.

View all posts by Tyler Lovato