Netflix started out as a DVD rental and sales site in 1997. The idea was that you could choose the movie you wanted online and then it would be sent to you in a red envelope. Using a flat-fee for unlimited rentals made them so attractive to avid movie watchers. Their main competitor at the time was Blockbuster, now out of business. Another reason why people found Netflix so desirable was that they didn’t have to go anywhere to get their movies, they could just sit at home, whereas Blockbuster was strictly a brick-and-mortar company. In 2007, Netflix announced that it was going to begin streaming videos, thus initiating the boom. Netflix has many competitors to date, including, HBOGO, Hulu and Amazon Prime.

In regards to sustainability, I think that Netflix is going to continue to thrive and expand their corporation into much more. Netflix has become popular because of the lack of commercials and ads. Paying for a subscription allows you access to hundreds of movies and shows without interruption. An advantage Netflix has over its competitors is its marketing strategy. They are by far the best-known streaming website and they don’t let you forget it. As you scroll through your various social media outlets you can clearly see the ads and commercials on the margins and in between posts. 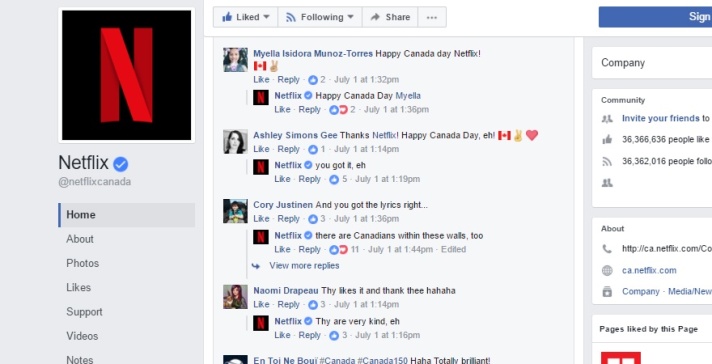 Creating “Netflix original series” has also allowed them to flourish while in the past they strictly needed the permission of the creators of the show to put it on there website. The company began by distributing movies and programming from other companies. It then moved forward to financing and creating its own original content, and now the name Netflix is synonymous with quality content.

Another reason for Netflix’ success is the wide variety of shows you can find on the application. Its habit of removing content once its licence expires creates an ever-revolving roster to keep us on our toes, and the convenience of having thousands of titles available on the one service keeps a lot of the people who may have been tempted to start trying to pirate a certain show with lesser impetus to do so. As we touch on the subject of binge watching of creative autonomy in the media realm it is important to understand that this leads producers to “tailor their programs for binge-watching, or at least incentivize a structural redesign of episodic narratives.” For some critics, “liberation also arrives in the form of random and unplanned encounters with media objects and new meanings.” Audiences today can call the shots on what they watch, when they watch it, and how. “Mobile platforms and lowered prices have also led to rapid market penetration by devices such as tablets and smartphones.” Consumers are not bound by time nor location. It will be interesting to see where Netflix goes from here but I hypothesize it will flourish more than ever.