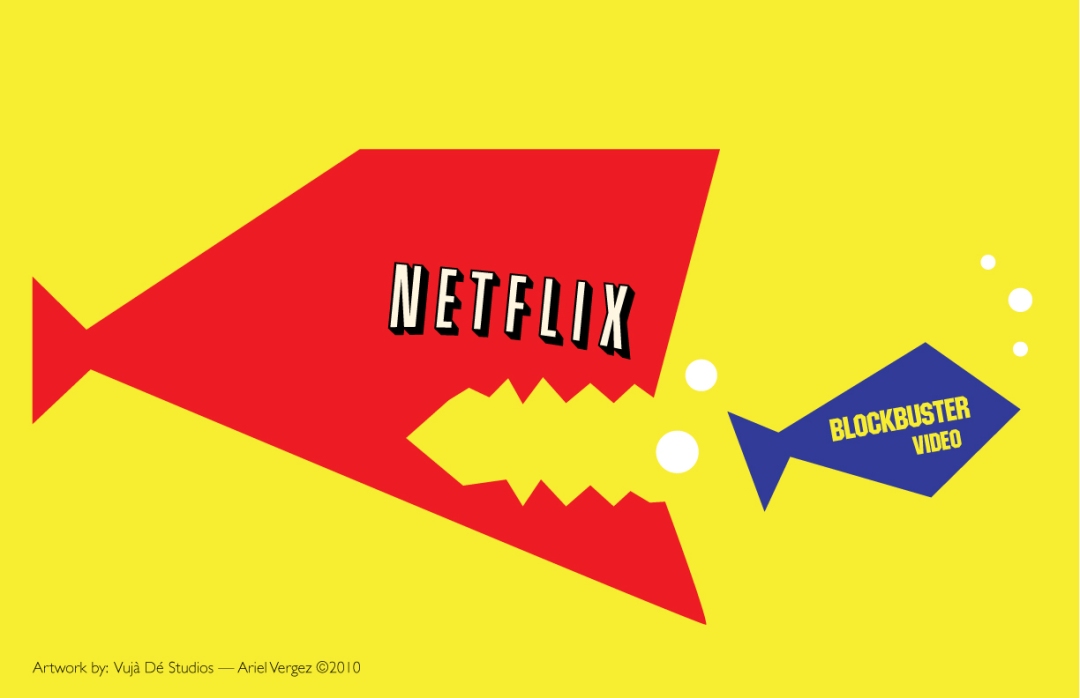 Netflix and Blockbuster: A Contest of Innovation

Netflix’s competition with Blockbuster was a corporate struggle that shaped a huge part of how consumer-based media distribution would be in today’s world. As I read about it, I often found myself comparing this competition with that of the ‘Console Wars’ between video game giants Nintendo and Sega in the late 80s and early 90s. Like the Console Wars, the struggle between Netflix and Blockbuster involved two companies weaponizing their own unique perspectives and methods regarding new entertainment technologies and how they would be distributed to consumers. Netflix today is an entertainment behemoth, with over 100 million subscribers to its online media platform. Meanwhile, Blockbuster has gone under, filing for bankruptcy in 2010 and slowly dissolving throughout the following years. However in 1997, things were a different story. 1997 is the year that Netflix was founded, at the time as an online-based DVD rental store, where customers could rent movies and have them shipped to their homes, contrasting with Blockbuster which required its customers to physically go to the store in order to pick up the movies they wanted.

This was the first step in Netflix’s rise to eventual victory over Blockbuster, but why was Blockbuster unable to keep up with the market in the same way that Netflix could. The answer, in general terms, is that Netflix was able to focus on innovating and finding ways to improve their content and ability to distribute it, while Blockbuster instead turned the majority of its attention to mimicking and attacking its competitors. While Netflix put a lot of effort into tracking and analyzing viewer data in order to craft an idealized experience for its customers, Blockbuster was unable to understand the fundemental reasons why Netflix was so popular, instead copying parts of its business model only on a surface level. The biggest example of this in my opinion is the introduction of Blockbuster Online. In an attempt to steal back some of its customers from Netflix, Blockbuster offered a service similar to Netflix’s rental program, where customers could rent a DVD online and return it to a store. In order to drum up popularity for this service, starting in 2007 Blockbuster also offered a free movie when the rental was returned. This promotion forced Blockbuster to operate at a loss, but did generate a lot of popularity for a time.

Unfortunately for Blockbuster, while they were busy mimicking Netflix in order to gain customers, Netflix was taking big steps towards what would eventually be the greatest and most influential innovation in the history of the companies: streaming. In 2007, the same year that Blockbuster introduced their new online deal, Netflix released their online streaming service, where consumers could access a huge selection of movies and television shows from the comfort of their homes. This changed the game radically, offering a new level of convenience and variety unheard of before. As time has progressed, Netflix has turned more and more of its attention away from the rental business and towards this streaming platform, filling it with popular series and even creating several extremely successful original series as well. It is also because of this service that I cannot imagine Netflix going the same way as Blockbuster any time soon. Convenience is the name of the game in today’s world of media consumption, with many consumers having little patience for inconveniences like going to a store, dealing with physical media, and paying late fees. Netflix’s ability to keep up with the times and innovate has always been its strongest feature, and as long as they are willing to embrace new ideas and change their business models in tune with an everchanging consumer landscape, Netflix could remain an untouchable monopoly of entertainment for years to come.

View all posts by geekishtroper